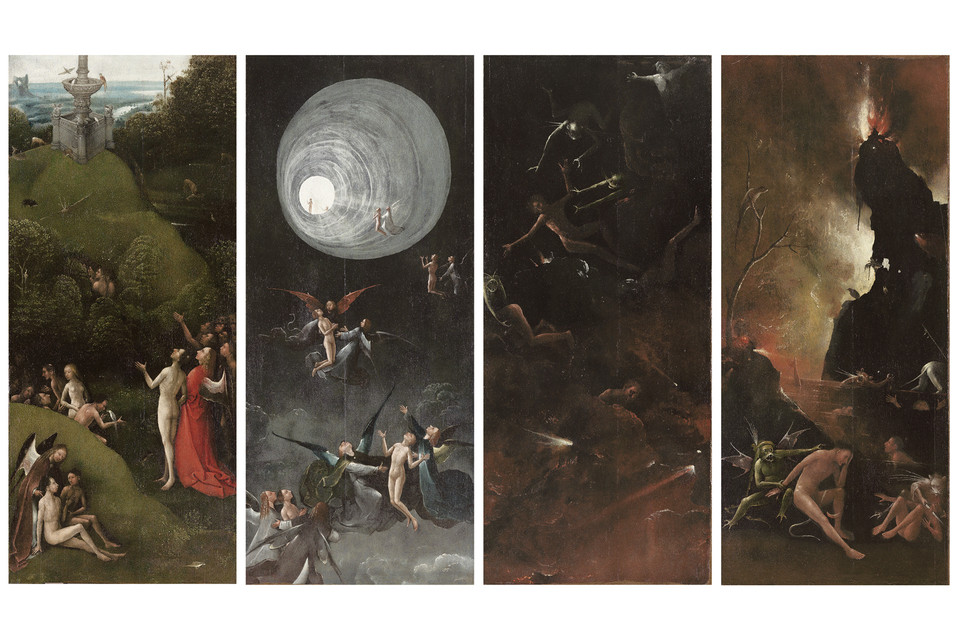 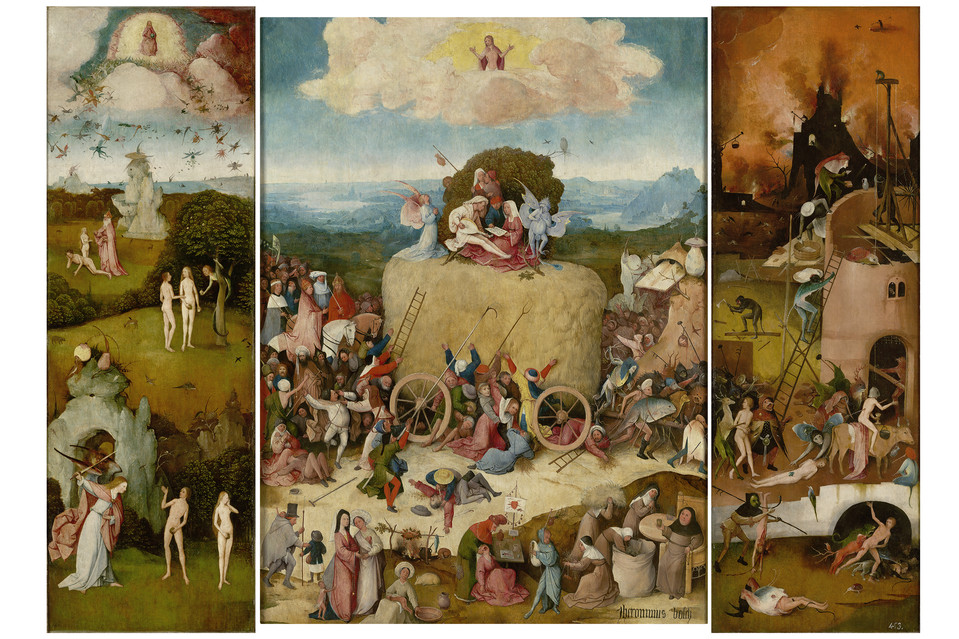 In the work of Hieronymus Bosch, the threat level is always “Imminent.” While other artists in 1500 were trying to depict the world realistically, Bosch was painting the imaginary, the grotesque and the horrific. In his triptych “The Temptation of St. Anthony,” his subject wanders a desert filled with demons. In “The Garden of Earthly Delights,” strange creatures devour one another across a vast and grim landscape.

As the art world prepares to celebrate the 500th anniversary of Bosch’s death in 1516, a series of coming major exhibitions spotlight the enigmatic artist whose work still has the power to draw crowds five centuries later. For a medievalist painting during a period vastly different from our own, he has stayed surprisingly relevant. With violent imagery and a cool detachment, his work powerfully resonates with the fears and fascinations of our own time.

Bosch’s paintings take us into a “state of emergency, in which hellish forces both worldly and otherworldly are let loose. There’s a level of cruelty, violence and horror which is universally eye-catching,” says Joseph Koerner, a Harvard University art historian and the author of a forthcoming book on the artist. “There’s no artist who is more in tune with the dangerous nature of images than Hieronymus Bosch.”

On Feb. 13, in the artist’s hometown of ’s-Hertogenbosch in the Netherlands, the Noordbrabants Museum will open a Bosch survey, featuring—in a remarkable curatorial feat—20 of his about 25 surviving paintings. In Madrid, the Prado will host a wide-ranging exhibition in May and the Harvard Art Museums will examine his legacy in a show starting this month.

’S-Hertogenbosch, a small city about an hour south of Amsterdam, has also prepared ayearlong celebration devoted to the artist, complete with circus performances, light shows and a Bosch “Heaven and Hell Cruise” through the city’s waterways. The city plans to transform its central square into a kind of Bosch theme park, with medieval songs and crafts—minus the looming threat of fire and plague. For those who can’t make the trip, Taschen will release a 300-page book of the artist’s complete works this spring.

Fascination with Bosch has long filtered into pop culture in outlandish mashups of the medieval and the modern. In season two of “The Simpsons,” after being hit by a car, Bart hallucinates a cartoon version of “The Garden of Earthly Delights.” Musicians fromMichael Jackson to Deep Purple and Pearls Before Swine have used Bosch’s demonic renderings as album cover art. Fashion designer Alexander McQueen had them imprinted on silk bodices and fitted jackets in his final collection in fall 2010. And “Pan’s Labyrinth” director Guillermo del Toro has cited Bosch’s creatures as inspiration for those in his films “Hellboy” and “Hellboy II.”

Bosch was so well-known in his lifetime that copies and imitations of his work have never been out of circulation. Scholars believe he worked with assistants, making attribution still more complicated. “He was getting remixed in the 16th-century,” says Carla Gannis,a Brooklyn-based digital artist. Originally organized by the St. Louis Art Museum, the Harvard Art Museums’ “Beyond Bosch” exhibition traces his impact through prints by other artists, beginning with Alart du Hameel, through Pieter Bruegel the Elder, to M.C. Escher and contemporary Belgian artist Antoine Roegiers.

Since his first paintings appeared in the late 15th century, Bosch has meant something different to each successive generation. After a period out of favor, his work re-emerged in the 19th-century as Enlightenment tastes and interest in classical forms waned and Northern Renaissance art became fashionable again.

In the 1920s, his dreamlike landscapes were an inspiration for surrealist painters Joan Miró and Salvador Dalí, who may have seen his works in the Prado, which holds the world’s largest Bosch collection.

In the late 1950s and ’60s, his renderings of copulation and anarchy were taken up by the counterculture movement as depictions of righteous hedonism and free-love, earning a place on album covers and in works like Henry Miller’s book “Big Sur and the Oranges of Hieronymus Bosch.” (Some have even theorized that Bosch had eaten moldy bread, a kind of proto-LSD, and had a bad trip.) Today, artists and writers are more likely to find modern themes reflected in his works.

“The Bosch paintings are about disorder, about the world gone wrong, about the wages of sin,” says crime novelist Michael Connelly, who named his hard-boiled LAPD detectiveHieronymus “Harry” Bosch. When Mr. Connelly published his first novel in 1992, he chose to reference the artist in part because of the chaos and beauty he saw in Los Angeles, where the book is set.

“I thought, 500 years later, where is ‘The Garden of Earthly Delights’ in our world? It might be Los Angeles,” says the author, who owns a pair of Doc Martens boots printed with scenes from the painting.

Ms. Gannis recently spent a year recreating “The Garden of Earthly Delights” (1500-05) in emojis, both traditional and invented. Her 13-by-7-foot “The Garden of Emoji Delights” features tiny versions of some of Bosch’s best-known scenes, including one in which a mermaid balances atop a group of men. Ms. Gannis says she was interested in translating Bosch’s use of iconography into “the symbolic language of today.” “I was completely faithful to the triptych in the way that I emojified it,” she says.

“Hieronymus Bosch put his finger on the wound,” wrote the American author and conservationist Terry Tempest Williams in an email. Ms. Williams spent seven years observing and writing about “The Garden of Earthly Delights” for her 2000 book “Leap,” a meditation on the artwork. At the Prado, she took out her binoculars and began bird-watching, using the painting as her landscape. She counted 35 species, including the Spoonbill, Blue Heron and Pygmy Owl.

“Never has ‘The Garden of Delights’ been more relevant as we face the repercussions of our own greed in the form of climate change—a hellish future of our own making,” she says.

Born Jeroen, or Jheronimus, van Aken around 1450, Bosch belonged to a family of artists. His father, several of his uncles and two brothers were all painters who worked out of a studio on ’s-Hertogenbosch’s main square. Around 1480, he married a well-off woman, Aleid van de Meervenne, and moved with her into a nearby house. They never had children, and scholars believe Bosch continued to paint in the family workshop.

Bosch is often discussed as a painter of Christian morals. And, on one hand, he was: His works depict the gruesome fates that await those who succumb to temptation and land in hell. But there’s also evidence he painted for pleasure—his own, and that of his clientele. Bosch was one of the first northern European artists to make drawings independently, not as studies for paintings. His surviving works belonged mostly to high-ranking members of secular society, not churches. Perhaps most important, his wife’s fortune gave Bosch a flexibility many of his contemporaries lacked.

Though his hometown was something of an artistic backwater, membership in an elite religious association, the Brotherhood of Our Lady, helped Bosch gain access to collectors such as the wealthy and powerful Philip I of Castile, also known as Philip the Fair. (Philip’s connection to the Habsburg dynasty, which ruled Spain for much of the 16th and 17th centuries, helps explains why most of Bosch’s works are today housed in the Prado.) A knack for publicity didn’t hurt either: He signed some of his paintings in bold lettering by a pen name he took from the town,Jheronimus Bosch.

He had many followers but few precedents. Bizarre, hybrid creatures had appeared previously in illuminated manuscripts and gothic cathedrals, but hardly ever on panel paintings, where Bosch put them. Other artists placed holy or sacred subjects at the center of their triptychs; Bosch placed depictions of lust and sin there instead. His painting style itself was unique; he mixed different pigments and used a sketch-like technique to create a dystopian effect.

Because the number of works scholars can confidently assign to Bosch is so small—no more than around 25 paintings and 20 drawings—his pieces are rarely owned by private collectors. According to Christie’s and Sotheby’s, no work definitively by Bosch has ever come to auction.

The closest examples are attributed to his workshop, his circle or a “follower of Bosch,” an artist working in the same style immediately after Bosch’s lifetime. These works can fetch strong prices at auction; in 2013, a panel painting attributed to a follower of Bosch sold for $902,500 at Christie’s in New York. Assunta von Moy, an old masters specialist at Christie’s, said these works have an “incredibly modern appeal” and draw both old masters and contemporary art collectors.

In the Netherlands, preparations for the 500th anniversary have been under way for a long time. As early as 2001, Noordbrabants Museum director Charles de Mooij was making plans for “Jheronimus Bosch: Visions of Genius,” the exhibit that will open next month. A medium-size institution with no Bosch collection of its own, the museum managed to borrow nearly every work from the artist’s surviving oeuvre. The loans come from major museums, including the Prado, the Louvre and the National Gallery in Washington, D.C. Though ‘The Garden of Earthly Delights’ won’t be on display (it never travels from the Prado), the show will feature nine newly restored works.

The loans were achieved as a sort of exchange for work conducted by a small team of researchers and conservationists connected to the museum. For six years, the Bosch Research and Conservation Project traveled to museums with Bosch collections to study his works. The group used a combination of high-resolution photography and infrared reflectography to document and penetrate multiple layers of each painting’s surface. The results will be published in a two-volume tome accompanying the exhibition.

Bosch’s scenes remain a fruitful area for debate and discovery. For years, scholars have wondered if a female martyr in one of the artist’s triptychs might be St. Wilgefortis, the daughter of a pagan king who asked God to give her a beard to escape a bad marriage. Her identity hinged on the question of whether Bosch depicted her with a beard. A close examination revealed he did. The work, which normally hangs in Venice’s Accademia Galleries and was painted sometime between 1495 and 1505, will be presented in ’s-Hertogenbosch as “The St. Wilgefortis Triptych.”

“Every painting has its own secrets,” says Mr. de Mooij.

Another painting, “Death and the Miser” (circa 1500-10), depicts an old man on his deathbed. Advanced photography shows that in an early draft, the man is attempting to buy off death by offering it money. But in the final version, the one visible today, the man has a choice—he hasn’t yet decided to sin. “We all have a choice between good and evil,” says Jos Koldeweij, a co-leader of the study. “And that is what Bosch is saying in almost all of his paintings.”

Write to Anna Russell at Anna.Russell@wsj.com